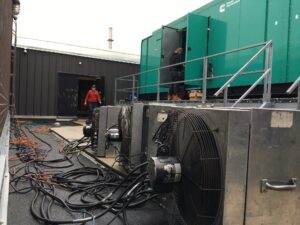 October is an important month in the annual cycle of the University of Toronto’s (U of T) Data Centre. Each October, the Enterprise Infrastructure Solutions (EIS) team performs maintenance on its dedicated 750 kilowatt (kW) Cummins Diesel generator, which is foundational to the facility’s reliability.

In addition to hosting mission critical servers and storage, the Data Centre houses the network infrastructure that provides internet connectivity between the St. George, Mississauga and Scarborough campuses, all buildings on the St. George campus and the campus Wi-Fi networks. The Ontario Research and Innovation Optical Network (ORION) & GTAnet both have points of presence located in the Data Centre. Even the University Health Network relies on services and equipment hosted here.

EIS works year-round to keep the facility’s core components current. This October, they performed a “rip and replace” upgrade to the 10-year-old building automation system and controls package that automates the cooling system and provides very detailed instrumentation for the Data Centre. This instrumentation includes 510 different data points that are continuously monitored, recorded and charted. These include pump speeds, water and air pressures and flow rates, power consumption, supply and return water and air temperatures and critical indicators of normal and developing adverse conditions. 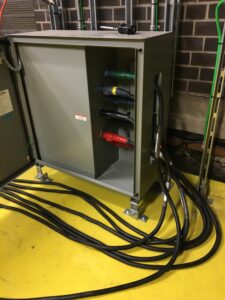 On Sept. 27, this project entered a critical phase during which the engineering team, led by Ehvert Mission Critical and the Automated Controls and Energy Solutions Group, physically disconnected the 10 old micro-controllers that monitor and control the facility from more than 150 wires, spanning four rooms on three floors, and replaced them with new controllers. During this process, the facility was entirely under manual control. It took one day to remove and replace the controllers and eight more days to refine the programming and validate the installation. It will take another month to complete the testing for the many failure scenarios that must be anticipated and accommodated while under automated control.

Coincident with the overhaul of the building automation system, EIS took the opportunity to enable automated integration with a building chilled water upgrade project that Facilities & Services (F&S) is leading. This project will allow F&S to reclaim the waste heat from the Data Centre, using it to heat other parts of the McLennan Physical Laboratories building during the cold months.

In the middle of all of this work, the crew from Cummins Power Generation performed the generator’s annual major preventative maintenance on Monday, Oct. 4. This included an oil change and analysis and a full load-bank test, during which they connected four very large heaters, totalling 750 kW, and ran the generator at 100 per cent load for two hours. This annual task is necessary to ensure the Data Centre remains available and functional during a power failure.

“Deferred maintenance is maintenance foregone,” says John Calvin, Manager, Data Centres, EIS. “All of the reliability features must work together, perfectly, whenever they’re needed. Testing is the only way to know that they will.”