Speeding Up on Curves

TechKnowFile 2014 Keynote: Speeding Up on Curves 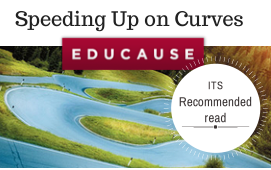 It might seem unusual for an IT conference to kick off with talk of speeding through curves. Yet that’s exactly how Brad Wheeler, Vice-President for IT and CIO, Indiana University, began his keynote speech at U of T’s TechKnowFile 2014 on May 7th.

Preceded by President Meric Gertler’s introduction speech, Wheeler argued that curves are interesting because we are uncertain about what lies at the bend. And while this uncertainty makes some nervous, those who foresee and shape curves come to be regarded as leaders.

For example, Indiana University’s online MBA program has quadrupled since it was adapted in 1999, while the residential MBA program is now about half the size it was then, said Wheeler.

“It’s the same faculty, it’s the same admission standards. It’s just seeing that curve and getting ahead of the game. Now we have a lot of schools saying, ‘We’d better start to figure this out.’”

But what curves lie ahead in the field of higher education?

According to Wheeler, one such curve is the result of a decrease in public funding, which is turning education into a private good, and has brought about price increases and cost pressures.

Digital economies of scale are another curve. Affecting content, distribution, and the market, they have prompted questions about the future of current higher education systems.

Lastly, the way in which university chief information officers (CIOs) exert influence and authority can not only help resolve conflict and determine how IT services will be provisioned, but also help higher education institutions accumulate and aggregate leverage.

Leverage was a common theme in Wheeler’s presentation. Leverage, he said, is more easily obtained when higher education institutions act through a strategy of interdependence. This strategy can act as a demand aggregator amongst colleges and universities. It also enabled Indiana University to quote USD $6 million for upgrading its current enterprise resource planning system (ERP) rather than the $83.5 or $300 million which other universities bookmarked for the same task.

“What an exciting time to be in higher education,” said Wheeler as he closed the keynote speech. Judging from the audience’s effusive reception, they agree wholeheartedly.