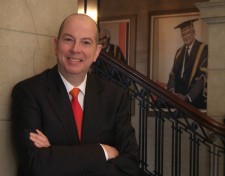 We are pleased to share that Robert D. Cook, U of T’s Chief Information Officer, was honoured with CUCCIO’s Community Award at the CANHEIT / HPCS 2016 Conference on June 20th at the University of Alberta in Edmonton, AB.

The CUCCIO Awards are designed to honour individuals, groups or institutions whose work exemplifies CUCCIO’s efforts to build and support Canada’s higher education IT community.  The awards include two other categories, the Innovation Award and the Collaboration Award.

Mr. Cook was awarded with the Community Award as a recognition for his efforts to advance CUCCIO’s vision to build, support and enrich the higher education IT community. CUCCIO further acknowledged Mr. Cook’s demonstrated principles of information-sharing, collaboration and knowledge creation throughout the CUCCIO community.

In his video message to the delegates at the conference, Mr. Cook expressed his gratitude to his peers and colleagues from across Canada, “I am deeply moved that you, my peers, have bestowed this honour for my commitment to the professional collaborative value of the CUCCIO community, a community that serves each of us and our institutions so consistently well.”

CUCCIO is Canada’s community of information technology leaders in higher education, working together to help Canadian universities excel through the innovative and effective use of IT. Incorporated in 2006, CUCCIO is the result of almost 40 years of information-sharing, collaboration, knowledge creation and advocacy among provincial and regional associations of IT leaders in post-secondary education. Today, CUCCIO is a non-profit, member-funded corporation representing more than 50 universities Canada-wide, who collectively serve over 90% of Canada’s university students.

University of Toronto has been an actively involved and contributing member of CUCCIO under Robert Cook’s leadership.

Find out more about CUCCIO and subscribe to CUCCIO’s Fast Five, a weekly feed of the latest Higher Education IT news from Canada.