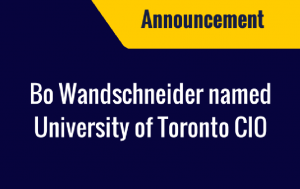 The Information Technology Services (ITS) portfolio within University Operations currently has eight directors in place, with a mandate to continue to enhance the alignment of information technology to the university’s mission. The University’s inaugural CIO, Robert Cook, took the helm in 2008. Since that time, the ITS team has collaborated with academic and administrative stakeholders to renew the central administrative data centre and the tri-campus wireless network; strengthened the profile of information security through Policy and services; expanded the Academic Toolbox and Online Learning professional services; initiated the Next Generation Student Information Services program; and introduced the university to cloud services. Following 8 years in the role, Bob signalled his intention to retire, and a Search Committee was struck, with broad representation across the University.

Scott Mabury is delighted to announce that Bo Wandschneider has accepted U of T’s offer to join the University Operations team as CIO, effective May 1, 2017.

A respected IT veteran, Bo Wandschneider has spent 30 years in Higher Education Information Technology, first at the University of Guelph and more recently as CIO and Associate Vice Principal, Information Technology, at Queen’s University. His early years included a decade in an academic unit where Bo was embedded in the research enterprise and actively engaged in teaching and learning. These experiences have allowed him to develop a deep appreciation and understanding of the needs of the academic community.

During his career, Bo has been through two institution-wide email migrations; introduced an Administrative Systems Steering Committee to oversee the prioritization of enterprise administrative projects; and developed an ITS Strategic Plan. He has led and developed several partnerships around research data management, discovery and analysis, including a lead role in the formation of the ODESI project through Scholars Portal. Bo also has experience reorganizing an ITS leadership team, starting what Bo refers to as a “cultural change process”.

A truly collaborative leader, Bo is well known across Canada for the breadth and depth of his knowledge, his desire to build partnerships, and his openness and willingness to share information and expertise with colleagues and staff. A frequent presenter at various professional forums such as Educause and CANHEIT, Bo is known as a visionary thinker and an effective strategist.

As our second CIO, Bo will take the helm from Patrick Hopewell who has been serving as Acting CIO since January 1. From May 1st, Bo will be located in the CIO office on the lower ground level of Simcoe Hall.

Please join us in welcoming Bo to ITS and to U of T.